Store cupboard science for the festive season – top of the popcorn!

The Pop in Popcorn!

How about making some popcorn to enjoy when you’re watching a Christmas movie? We’ll explain why and how it pops.

You’ll need a handful of popcorn kernels, a tablespoon of oil and, of course an adult to help as we’re using hot oil and heat.

Put a tablespoon of oil in a large pan with a lid. Heat on medium heat till it’s warm, add a handful of popcorn kernels. Put the lid on and shake and swirl the kernels in the oil.   After about 90 seconds you will hear the kernels start to pop, shake the pan again (with the lid on) and every 15 seconds give the pan a shake off the heat to ensure that the kernels are evenly distributed.  After about four minutes you will hear the pops lessen.  Take the pan off the heat and look at your popped corn! Eat as it is or sprinkle over some cinnamon (or melted butter and cinnamon). 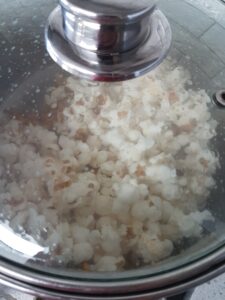 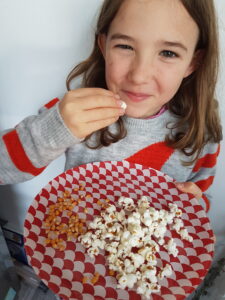 The popcorn kernels make a popping noise because there is a small drop of water in the inside of the corn kernel (a seed) .  As we heat the kernels that water turns into steam, expands and ruptures the skin of the kernel making the pop.   The kernel of the corn has a strong outer coating called the “pericarp”. Inside that is starch, which turns into soft fluffy popcorn which we are eating.

If you’ve got fresh cranberries ready to make cranberry sauce for Christmas dinner you can try the same experiment. When you heat cranberries listen to them – can you hear them pop and see them pop open? This is because inside them they have tiny air pockets and seeds.  As you heat the cranberries the air inside is heated up and expands, making the berry pop open. Check out this website for more info:

The Science Behind Cranberries